Made in Italy Exports in post-Covid Japan 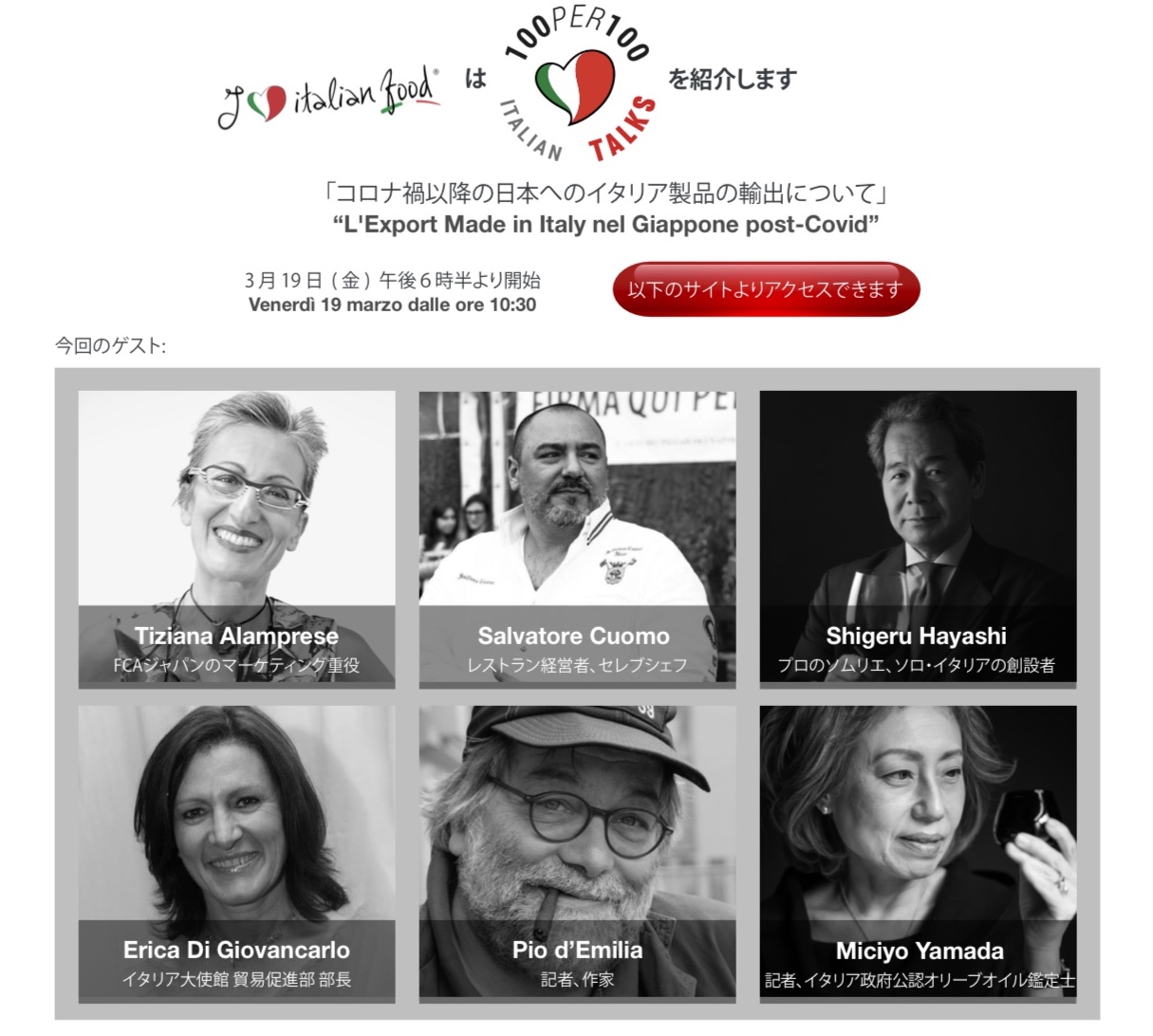 On the 19th of March 2021, 100per100 Italian Talks was dedicated to the Japanese market, with six exceptional speakers who shared their vision of the new dynamics of Made in Italy exports to Japan.

A digital edition of the Talks told through a sparkling and innovative format, signed by I Love Italian Food, which provides for four more appointments during 2021.

“A year after the start of the pandemic, we have all changed habits, the way of communicating has changed and the way of exporting is also changing. Japan represents the fifth country for export of made in Italy products, but to spread Italian products and food, is the concept of made in Italy alone enough? Or are new strategies needed? This is the reason for these Talks: to propose visions and points of view on how to improve the export of Italian products on the Japanese market” says Alessandro Schiatti, CEO of I Love Italian Food.

Moderated by Stefania Viti, journalist and expert of Japanese society, culture and language, the conference was the stage for the launch of new possible strategies for the diffusion of Made in Italy in Japan.

Tiziana Alamprese, Marketing Director of FCA Group Japan, a true representative of Italy and Italian style, opened the conference. Alamprese, who has been with the Italian automotive group for 16 years, talks about the importance of using Made in Italy as a reference icon for the positioning of its brands and the cultural contamination between Japan and Italy as a key axis. Investments on digital and social are the winning weapon to obtain a strong competitive advantage, especially in a pandemic phase. The secret to conquering Japan? According to Tiziana Alamprese is “the construction of a constant online presence, reassuring and culturally akin to the target, engaging and viral on social media“.

Salvatore Cuomo, entrepreneur, restaurateur and Italian chef, known in Japan as “The Pizza Man”, gave the following speech. In his speech, he tells how the pandemic has changed, among other things, the communication with customers, as well as with the staff. The impossibility of travelling with the same frequency as before, in fact, forced him to field new solutions, fortunately take advantage of the available technology. A strong need to adapt to this change, which has led on the one hand to the spread of remote working and, on the other hand, to the necessary and consequent development of delivery. With smart working, in fact, more and more people are taking advantage of this service, to the point that “there is a strong desire to strengthen this sector, which is becoming a vital outlet with which to relaunch catering activities“. It is therefore a message of hope that of Salvatore Cuomo, who invites everyone, including Italian producers, to take advantage of the opportunities of this moment and to learn to live with Covid.

Representing the world of wine, a great excellence of made in Italy, was Shigeru Hayashi, the first professional Japanese sommelier in Italy and an expert of Italian wines, who with his company Solo Italia deals with imports for the sector. After having presented the Japanese historical context from which, starting from the seventies, the import of Italian products developed, Hayashi points out that Italian wine still represents only 20% of the wine imported in Japan. In fact, despite the vast number of Italian restaurants, there are still limits to the success of these products on the Japanese market. Considering the complex situation and exacerbated by the pandemic, Shigeru Hayashi launches a message of encouragement: on one hand he suggests producers and importers to “turn this situation into an opportunity, developing products suitable for domestic consumption“. On the other hand, he also suggests to Japanese people to match Italian wine to the foods they usually consume at home, especially in this moment in which the consumption outside home has decreased.

The conference continues with the intervention of Dr. Erica Di Giovancarlo, Director of the ICE Italian Trade Agency Office in Tokyo. The picture of the Japanese market described by Dr. Di Giovancarlo is one that sees, starting in 2019, the entry into force of free trade agreements between the European Union and Japan, agreements that naturally gave a great boost to Made in Italy as well. However, the year of the pandemic marks a minus for the Italian agri-food sector, which loses positions with a drop of 7.6%. In her speech, Di Giovancarlo points out, however, that if on the one hand there are declines for products such as wine and cheese, pasta and canned tomatoes, on the other hand, have given excellent performances. In fact, “the agri-food sector in 2020 has shown the ability to continue to grow despite the dramatically complicated situation”, says Dr. Di Giovancarlo. This is also demonstrated by the numerous activities of ICE to support Italian producers: from the recently concluded Foodex, which saw the participation of 100 Italian companies, to B2B meetings with buyers, from collaborations with large-scale retail trade to events, which will soon start again in presence.

Then it was the turn of Pio D’Emilia, journalist and writer, correspondent for Sky TG24 in Asia.

In his speech he underlined the strong similarities between Italy and Japan, especially at a gastro-cultural level, starting for example from the valorization of raw materials. It is precisely this rigorous approach to products and preparations, which unites Italians and Japanese, that has allowed Japan to host top-level Italian restaurants, even when they are run by local, rather than Italian, professionals. “This gives the measure of why the Japanese are so attracted to our flavors, our presentations, our way of eating, which is also a lifestyle”, says Pio D’Emilia, who concludes his speech by also mentioning the productive interchange that binds the two countries.

The Talks were concluded by Miciyo Yamada, journalist, writer and olive oil taster recognized by Mipaaf. Yamada focuses on the world of olive oil, explaining how imports of this product in Japan have increased even during the pandemic. The Japanese people, in fact, are very attentive to the concept of healthy but, with the new habits in terms of consumption outside the home, the importance of tools such as storytelling and branding cannot be overlooked in order to raise awareness of Made in Italy products and convey the right notions.

In fact, a research has shown that “the second cuisine that the Japanese prefer after the Japanese one, of course, is the Italian one“, so it is increasingly necessary for Italian producers to use Japanese media and languages to address local consumers and transmit knowledge about products.

This Japanese edition of the 100per100 Italian Talks therefore presented a complex picture with heterogeneous visions regarding strategies to improve Made in Italy exports to Japan. The picture was made up not only by the speeches of the speakers, but also by the messages of the six Protection Consortia that supported the initiative of I Love Italian Food: Prosecco DOC, Lambrusco, Asiago, Gorgonzola, Taleggio and Pecorino Sardo. All realities that not even Covid-19 was able to stop and that have decided to look beyond the pandemic and invest in exports. Great hope also came from the partners of the Talks, such as the Italian Chamber of Commerce in Japan and the Italy-Japan Foundation, but also from the media partners Italianity, Garage Pizza and italiani.it.

In collaboration with Italianity, Garage Pizza, italiani.it and Kibo and with the patronage of ITA Italian Trade Agency and Italian Chamber of Commerce in Japan.