Will made in Italy save Italy? 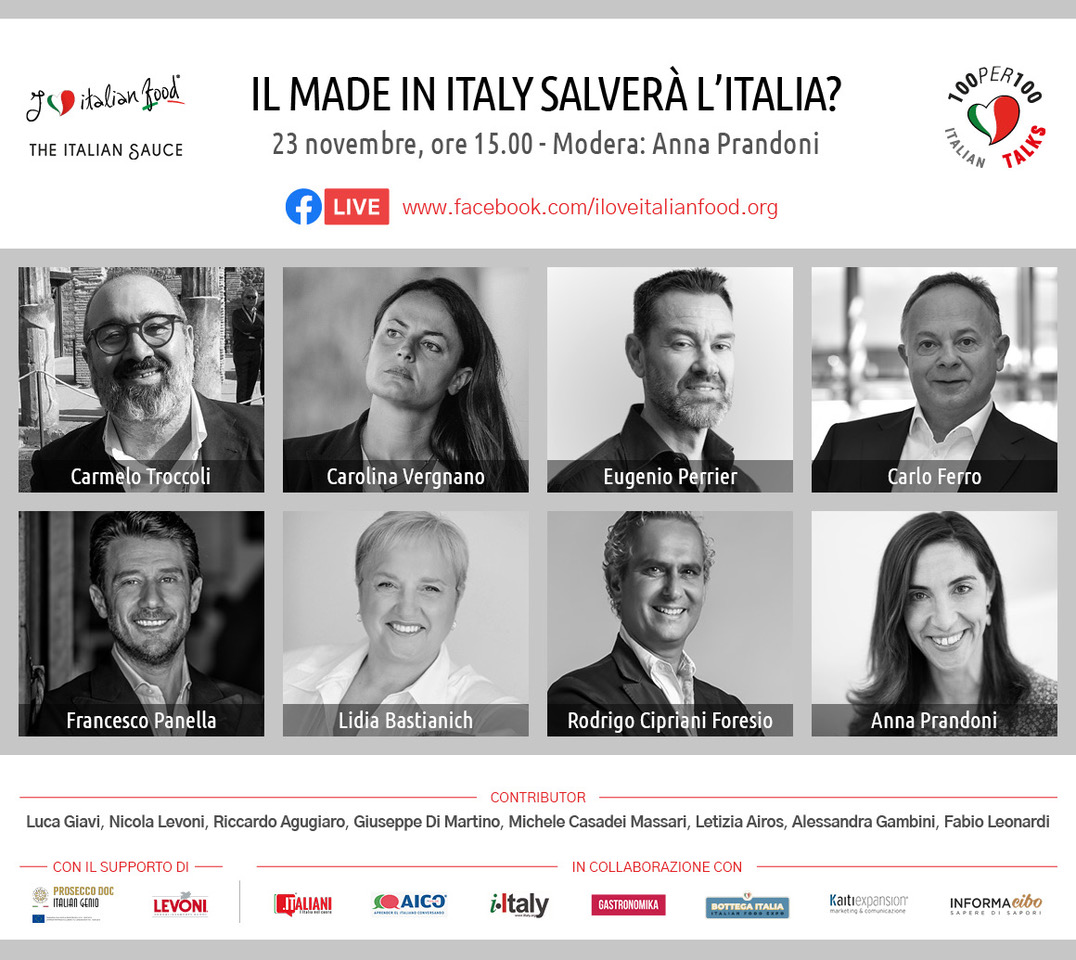 Will made in Italy save Italy? This is the question answered by the seven exceptional speakers involved in the 100per100 Italian Talks that took place on November 23, 2020.

A digital edition of the Talks told through a sparkling and innovative format, signed by I Love Italian Food in collaboration with The Italian Sauce.

“2020 will be remembered as one of the years that changed the world, in a radical way. Now it is necessary to understand how to manage and make the most of this change to give value to Made in Italy and Italian food and wine in the world. Hence the title of our Talks. ” says at the beginning Alessandro Schiatti, CEO of I Love Italian Food.

Moderated by Anna Prandoni, journalist and food and wine writer, the conference was the stage for visions on the future of Made in Italy and exports.

Francesco Panella, restaurateur, well-known television face and a true defender of Made in Italy, opened the dance. In his speech he expresses words of strong hope for the restart of the made in Italy, which he claims should become an aid asset for commercial operations abroad. Then, focusing on restaurateurs, the category he is called to represent, he suggests “three themes to work on for the renaissance we are facing: involvement of human resources in companies, sustainability and digitization”.

This is followed by the intervention of the President of the ICE Agency Carlo Ferro, strongly convinced that made in Italy will save Italy. An Italy in which, he says, “exports were the only driver of GDP growth after the 2008 crisis and is the first of the ingredients of GDP that marks growth even today in the post covid” .The reference framework is that of the pact for exports wanted by Minister Di Maio to strengthen the support of the country system for SMEs, but Ferro argues that to give new impetus to the economy it will also be necessary to have renewed opportunities with new policies and new investments in Europe.

Representing the world of e-commerce, which has undergone a strong acceleration in the pandemic phase, Rodrigo Cipriani Foresio, General Manager of Alibaba Group for Southern Europe. After focusing on the opportunities offered by alibaba.com, a B2B platform with over 26 million buyers from all over the world, Cipriani underlined how much it is now necessary for companies to digitize and internationalize their business: “Agri-food and culture of made in Italy food deserve to be promoted around the world, all the more so by focusing on digital and e-commerce strategies that allow companies and producers to reach consumers and buyers everywhere and effectively. Through the platforms of Alibaba, our excellences in the food sector, but not only, are able to reach almost 800 million Chinese consumers, young and attentive to the quality of the products. A course of consumer education is obviously necessary: ​​the Chinese people, just like the Italians, have a great culinary tradition, but their young population is increasingly looking for Western and refined products. In this sense, we at Alibaba focus a lot on Italian excellences such as oil and wine. Precisely on these premises we built our partnership with ICE, which started in 2018 with the helloITA section on our B2C platforms in China, and extended to B2B in these days, with the birth of the Made in Italy Pavillion”.

Then try to answer the question Carolina Vergnano, CEO of Caffè Vergnano, a company that exports to 90 countries around the world, for which it proves essential to communicate the Italian spirit, know-how and own values. According to Vergnano, companies should start again from Made in Italy because “Made in Italy is Italy”. We need to rediscover simplicity, dwell on the beauty inherent in our country, on history and on being Italian. “When we Italians are the first to become aware of our heritage, we will be able to open up and show others our uniqueness”, concludes Carolina Vergnano.

The conference continues with the intervention of Carmelo Troccoli, Director of the Campagna Amica – Coldiretti Foundation, who emphasizes that made in Italy is not a commercial brand, but a collective brand that represents an entire country, a lifestyle, a way of produce, which over the years has earned this great reputation thanks to the system activity that involves the best part of the entire agri-food chain of the country. According to Troccoli, “Made in Italy will save Italy, but only if it can continue to work in the direction that made it great, if it knows how to make the most difficult choices, those will allow us to keep the Made in Italy brand more and more distinctive and of quality, able to represent in a transparent way the agri-food chain of our country, from the field to the table “.

It is then the turn of Eugenio Perrier, an expert marketing consultant on Made in Italy in the USA. According to Perrier, in a highly competitive context such as that of food, it is essential not to stop at the guarantee of quality offered by made in Italy, but to use it as a platform to build on it and focus on three key concepts: empathy, culture and technology. For companies, in fact, listening orientation, understanding the needs and culture of the consumer will be fundamental, as well as the use of innovation and technology to add value to the customer experience. When asked if made in Italy will save Italy, Perrier argued that “if the Italian system and companies will have the determination to pursue progress, to use made in Italy as a platform to enter into direct and profound relationships with customers and understand their needs, if they have the courage to innovate in this way, then Made in Italy can really save and relaunch Italy and its extraordinary resources. “

The Talks concludes with the intervention of a true icon of Made in Italy, Lidia Bastianich, entrepreneur, author and famous television face in the US and beyond. Lidia Bastianich retraces her history, which brought her to the United States when she was only 11 years old. “More and more we must make known the true tradition, the true Italian product to Americans, who are passionate about Italian cuisine, love Italy” she says, praising the work done by the companies to bring authentic Italian products to the US market, but she also insists on how important it is to communicate the real made in Italy, making the products known, but also teaching how to appreciate and use them.

A complex but highly positive picture emerged from the seven speakers, to which the contributions of protagonists of F&B in Italy and around the world were added during the talk. In addition to Michele Casadei Massari, Letizia Airos and Ale Gambini, some representatives of leading Italian companies in terms of exports also took part. From Giuseppe Di Martino (CEO Pastificio Di Martino) who called Italy “the factory of good things in the world”, to Luca Giavi (Director of the Consortium for the Protection of DOC Prosecco) who claims that “Italy will be saved by genius Italian”. And again, Nicola Levoni (CEO Levoni) brought his own vision, ready to “bring 100% Italian made in Italy all over the world”, together with Fabio Leonardi (CEO Igor) who believes in “enhancing the territory and creating a image of Italian style appreciated all over the world” and Riccardo Agugiaro (CEO Agugiaro & Figna) who recalls that “we must be proud and attached to our traditions and our values, but we must apply them to a new world, Italian companies must understand it”.

Sponsors of the event are: Levoni and the Consortium for the Protection of DOC Prosecco. In partnership with Bottega Italia and Kaiti Expansion.