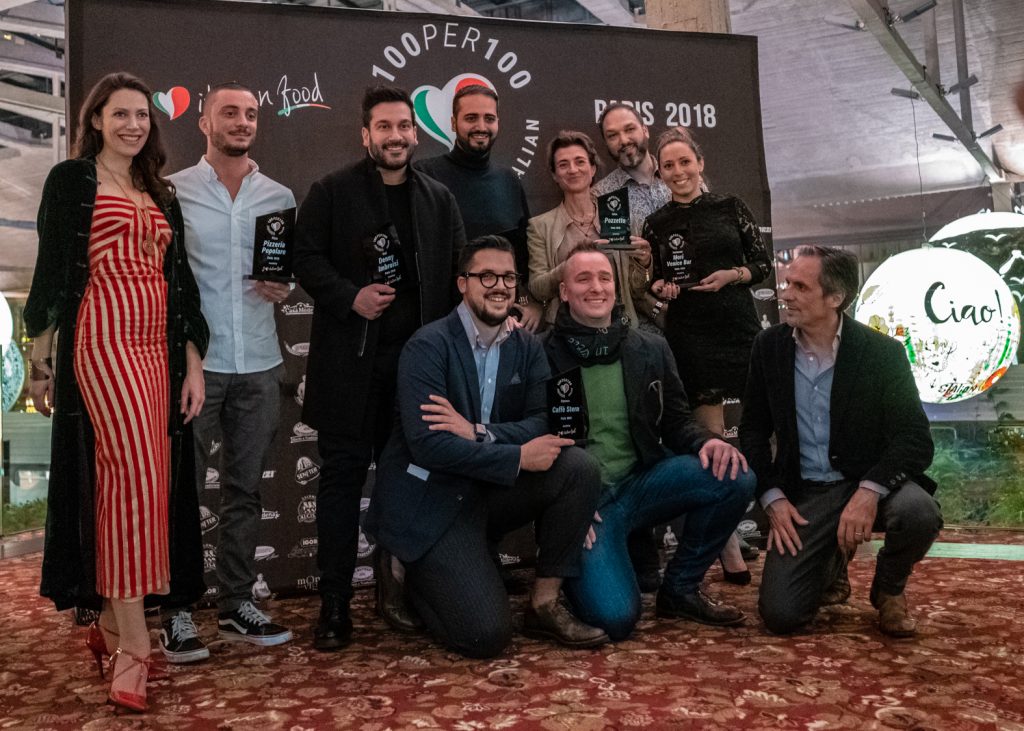 On Sunday October 21st, Paris served as a magical setting to unveil the third date of the 100per100 Italian 2018, an evening dedicated to honoring the true patrons of Italian Food in France.

This was an event organized by I Love Italian Food – a non-profit Association and a network which promotes and defends the real Made in Italy agribusiness in the world.

Created in the heart of the Food Valley in Italy in 2013 – I love Italian Food was originally an initiative by a group of friends keen on Italian food. Today the organization is an international community that has reached more than one billion contacts all around the world.

I Love Italian Food Cultural Association announced the names of the professionals who have stood out in promoting the real Italian food in Paris. During last months, indeed, 100 Italian professionals from the network of I Love Italian Food, based in Paris and experts in the made in Italy, have been involved in the project to suggest the names of the realities that every day distinguish themselves in offering an authentic Italian cuisine, to the French consumers as well.

According to Mr Alessandro Schiatti, CEO and co-founder of I Love Italian Food “Our missions is spreading the culture of Italian food worldwide and it’s our responsibility and pride rewarding all those professionals that work hardly everyday to spread the real Italian food in the world.”

And for the awards this year the six 100per100 Italian Awards were given during the exclusive evening leaded by Eleonora Galasso – foodpreneur, writer and TV host in France and UK -, hold at La Felicità, the biggest restaurant in Europe created by Big Mamma.

For the category 100per100 Italian Restaurant, through the recommendations of the network, the award went to Mori Venice Bar, Italian restaurant developed by Massimo Mori, which offers authentic Italian products and a menu that is totally free from any other culinary culture contamination.

The 100per100 Italian Espresso Award went to Caffè Stern, suggested by the network of I Love Italian Food as the perfect place to take some time and taste a real Italian espresso, also prepared in the most traditional way, with the Moka. The Alajmo family is leading the restaurant, with Giovanni, son of one of the Michelin starred brothers of Le Calandre, and Chef Denis Mattiuzzi, leading the kitchen brigade.

The recognition will not be complete without the award of ‘The real Italian pizza’, prepared according to the Neapolitan tradition, using 100% made in Italy ingredients, from oil, to tomato, to basil. The award 100per100 Italian Pizza went to Pizzeria Popolare, one of the most recent realities by Big Mamma group, under the guide of Head Pizzaiolo Giuseppe Cutraro.

For the 100per100 Italian Gelato award, the network of I Love Italian Food has no doubts that  Pozzetto is the most suggested place to taste the experience of a real homemade Italian gelato abroad in Paris.

An emerging but already successful name in the panorama of the Italian cuisine in Paris for the 100per100 Italian Chef award, given to Denny Imbroisi: talented, with Italian origins of course, founders of two restaurants in Paris, Ida and Epoca.

In conclusion, a special award for this French edition of the 100per100 Italian Awards: 100per100 Italian Idea, exclusively given to the successful company that takes the real made in Italy abroad: Big Mamma, the group founded in 2013 by two French guys, Victor Lugger e Tigraine Seydoux, leaded together with Ciro Cristiano, F&B Executive Chef of the group counting today 7 restaurants in France and two new openings in London, all focused on the authentic Italian cuisine.

The event was a huge success, thanks to the support of the partners of I Love Italian Food: Parmareggio, Igor, Pastificio Granoro, Alcisa, Casa Modena, Senfter, Monte delle Vigne, Bottega Gastronomica e Zorzi.